Want to know how to make a {Little Project} more fun?
Add the treat part to it!

Lately, we've been "playing with our food."  I figure we may as well learn something while we're getting cavities, lol.

We like to play these games for Halloween, and Easter too.
This time we added speaking in Spanish to the games.  Obviously, that's optional :)
For the first {Little Project} Jay and Kay estimated how many red (rojo) and silver (blanco) kisses were in the bag and wrote it down. When they were all sorted we counted them (in Spanish) and wrote down the numbers. Then we compared the count to our first estimation.
There were actually 26 of each color!
Jay was very close!

This other {Little Project} is a game we like to play with
conversation hearts.
I use a cookie cutter to trace hearts of each color of candy onto paper.  Then the kids sort them by color (we said the colors in Spanish this time) and then count them to see which color has the most! 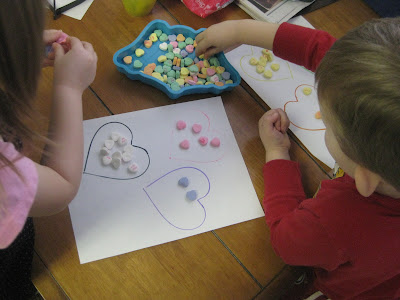 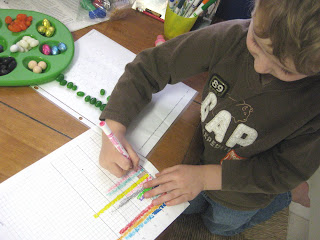 When we finished playing math games they both asked,
"Can we do this all again tomorrow?"
I guess that means it was a fun {Little Project}!

It is funny that this is the very activity we are doing today at preschool for math. Love your ideas.

I've got to try this one--I'm marking it for this week! Thank you!