Stop and Go in the Village 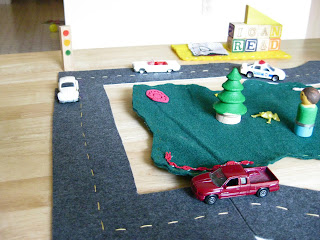 This week Jay became a stop-light backseat driver.  I think he finally is tall enough that he can see around me a little when we drive.  He is thrilled to call out what color the light is and what it means we should do now that he can see them.  So today our village got some roads and stoplights, as well as some cars.
This is what the roads looked like before they became roads.  In an effort to stick to my original goals (imagination stimulating, use what we already have/inexpensive, create a new toy to play with while we are away for the summer) our roads are made of scraps of fleece from some PJ's I made for my hubby for Christmas.  I ironed them onto some thick one-side-fusible Pellon from Joann fabrics to turn them from flexible fleece into sturdy roads. 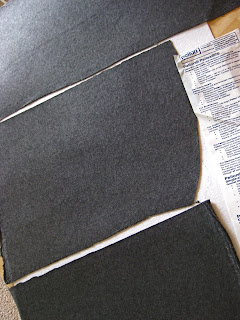 The cars were about as wide as my ruler so I just doubled that size and drew lines on the back of the fused on Pellon to make straight roads.  This sounds so simple, but it took me a while to figure it out...I kept wondering how I was going to see anything I drew on the black side! 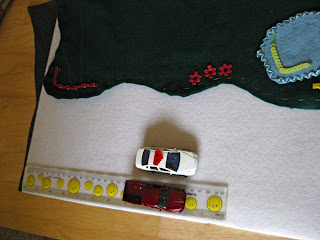 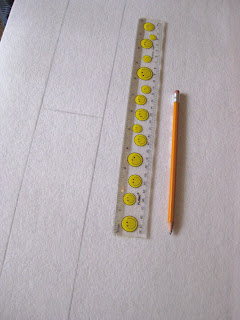 This is what the roads look like cut out. 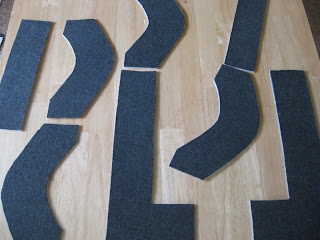 See how the Pellon is nice and thick to make them sturdy: 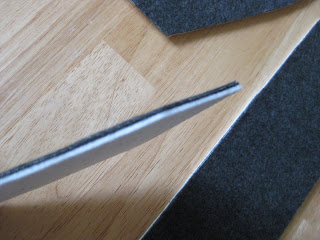 The stoplights are made from these pieces of wood I picked up at the Salvation Army store.  It looks like an old game similar to Jenga...I just used the tip of my finger and these stamp pads to make the circles on the stop lights. 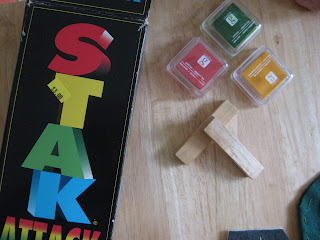 Here is the Stop and Go. Jay has never been into cars all that much before. He always liked things that flew better. I picked up some great little cars for a quarter each this past weekend at a garage sale-perfect timing!  I used yellow embroidery floss (just 3 of the 6 strands) to sew the lines in the road.  It was the finishing touch that just proved that I really cannot sew a straight line very well! 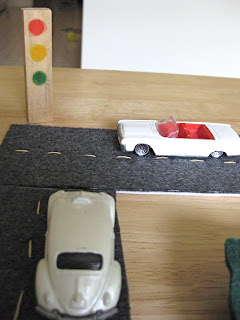 I just took the written driving test a week ago to register my car in a new state.  Somehow, This Little Project makes me feel like I am 16 again...

p.s. here are the links to the other places in our Village so far...
swimming pool, park, and library.
Posted by Jedda at 9:29 PM

Loving your little village Jedda! I have started collecting stuff to make our own village as well. Such a cute idea!

You come out with such great projects. I'm really getting a ton of ideas from your blog.
--

I have a couple of awards for you at my blog; do come by and pick them up. :)

OHH this amazing!! I'll really need one of this city for my dolls ;)
Thanks for share!
(^v^)

This is brilliant! I love how you used what you had, too. Great job.